The Business Analyst Core Concept Model™(BACCM™) consists of six Core Concepts, related through a dynamic conceptual system. All the concepts are equally necessary; there is no 'prime' concept, and they are all defined by the other Core Concepts. Because of this, no one Core Concept can be fully understood until all six are understood.

dynamic - the model acts as an algorithm, describing events and behaviours. It is not a static description of a specific moment.
conceptual - the model represents a set of ideas—core concepts—and key relationships among these ideas. system - the model describes a set of connected things that form a complex whole. It is not a 'computer system' or technology.
This is not as daunting as it sounds. The model takes common use definitions for each Core Concept, so you already know the basics. The result is a simple, deep model that is a powerful tool for understanding controlled organizational change.

Change - a controlled transformation of an organization

Need - a problem, opportunity or constraint with potential value to a stakeholder

Solution - a specific way of satisfying a need in a context

Value - the importance of something to a stakeholder in a context

Context - the part of the environment that encompasses the change
History
The BACCM was first conceived in May 2011, when the Core Team for A Guide to the Business Analysis Body of Knowledge® (BABOK® Guide) Version 3 first met. Our early work was an exploration of the foundations of the Business Analysis profession—a necessary step in understanding what aspects of BABOK® Guide Version 2 could be improved. The first iteration of the BACCM had four Core Concepts: Need, Change, Solution, and Stakeholder. After extensive analysis and debate, we realized that the model was too simple. By September 2011, Value and Context were part of the model.
The BACCM was first presented at the Building Business Capability (BBC) 2011 Conference, in an impromptu meeting over lunch. The people who joined us were an imposing group of experts. It was an informal discussion, and they asked excellent, insightful questions. We highlighted the things we thought would be the most contentious—such as new definitions for “business analysis”, “requirement” and “design”.

Business Analysis: the practice of enabling change in an organizational context by defining needs and recommending solutions that deliver value to stakeholders
Requirement: a usable representation of a need & a usable representation of a problem, opportunity or constraint with potential value to a stakeholder
Design: a usable representation of a solution & a usable representation of a specific way of satisfying a need in a context
The audience response to the implications of BACCM was not exactly what I expected. I was concerned that we weren't getting the ideas across, but the questions and discussion made it clear that they understood. Still, they were saying, “That makes sense.”
Since then, various Core Team members have shared the model with hundreds of people around the world, including more than 60 volunteer writers who joined the BABOK® Guide v3 team. We have had difficult questions and grave concerns raised—but after a little discussion each group has had the same reaction: “That makes sense."
Relationships in the Business Analysis Core Concept Model
At this point, the BACCM has been developed to an intermediate level of detail. It shows 54 significant relationships across 21 Core Concept pairs. For example, Changes have relationships with all six Core Concepts—including three with itself: Changes cause, change, or prevent Changes. 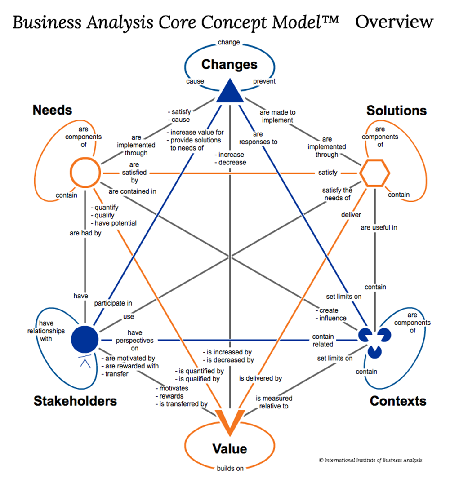 A Game: Core Concept Random Walk
There are many practical ways to use this model, but one of the first we discovered was the “Core Concept Random Walk” which can be used to characterise a change and provide significant insight. The game is simple:
In the example, you can choose from three relationships following the second roll of the dice:
- Stakeholders are motivated by Value.
- Stakeholders are rewarded with Value.
- Stakeholders transfer Value.
Four Stakeholders have been discovered: Auditors, Employees, Managers, and Accounting. Employees stand out as losers in this change. What is—or will be—their motive? What value is being removed or destroyed?
Exploring the BABOK® Guide and the BACCM
Over the next few months we'll examine each of the Core Concepts in greater detail. At first, the articles will look at the Core Concepts individually, and as they relate to each other. Once that foundation is in place we will explore the implications of the BACCM to the practice of business analysis, including some exploration of the BABOK® Guide.
Our next article will be an overview of all six Core Concepts, along with some important—but not obvious—implications of the model.